This section lists selected presentations of our 22q research results for medical professionals and researchers.

To see presentations tailor-made for individuals with 22q11.2DS, their families and caregivers, or the general public, please go to our presentations page. 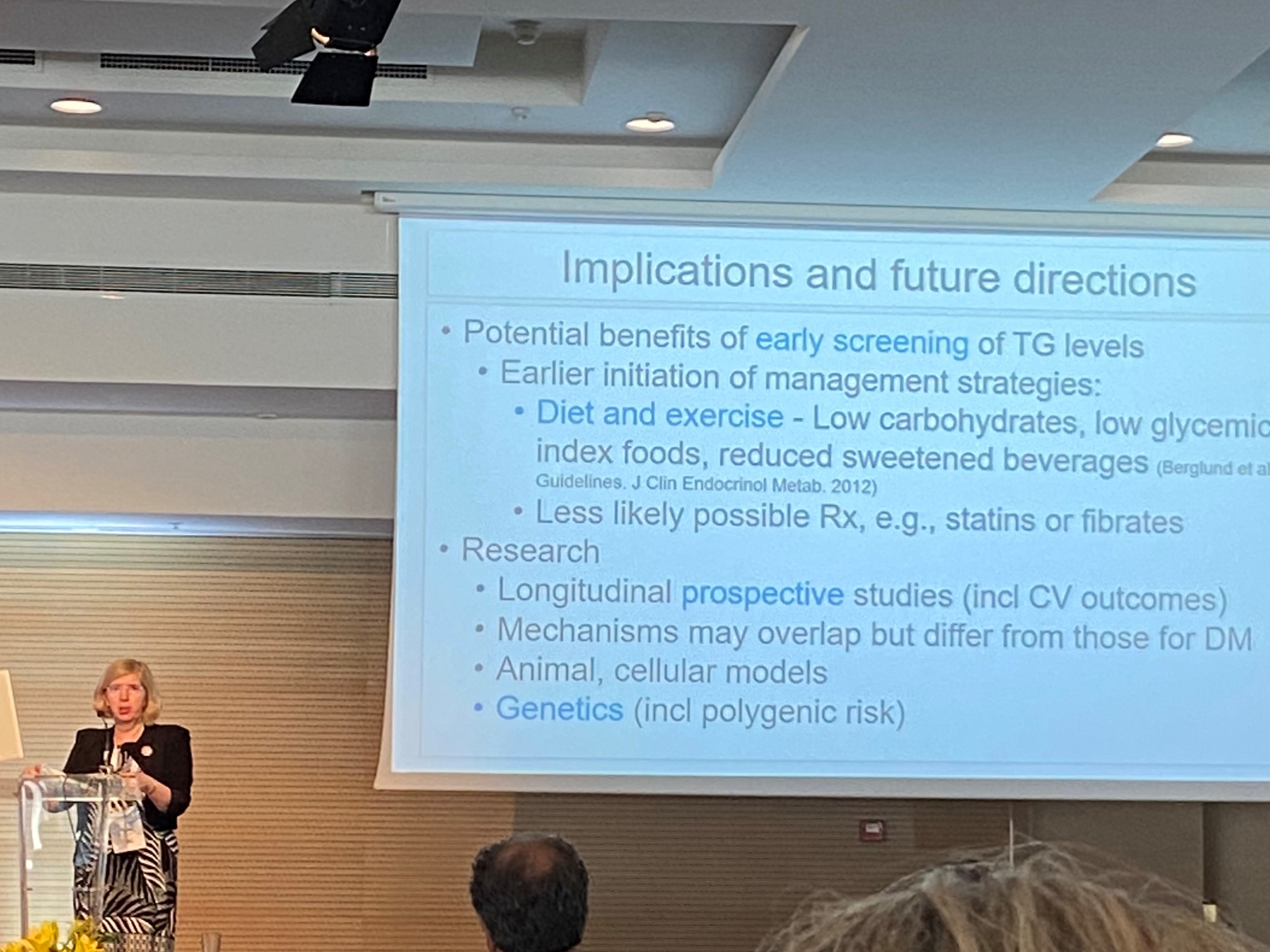 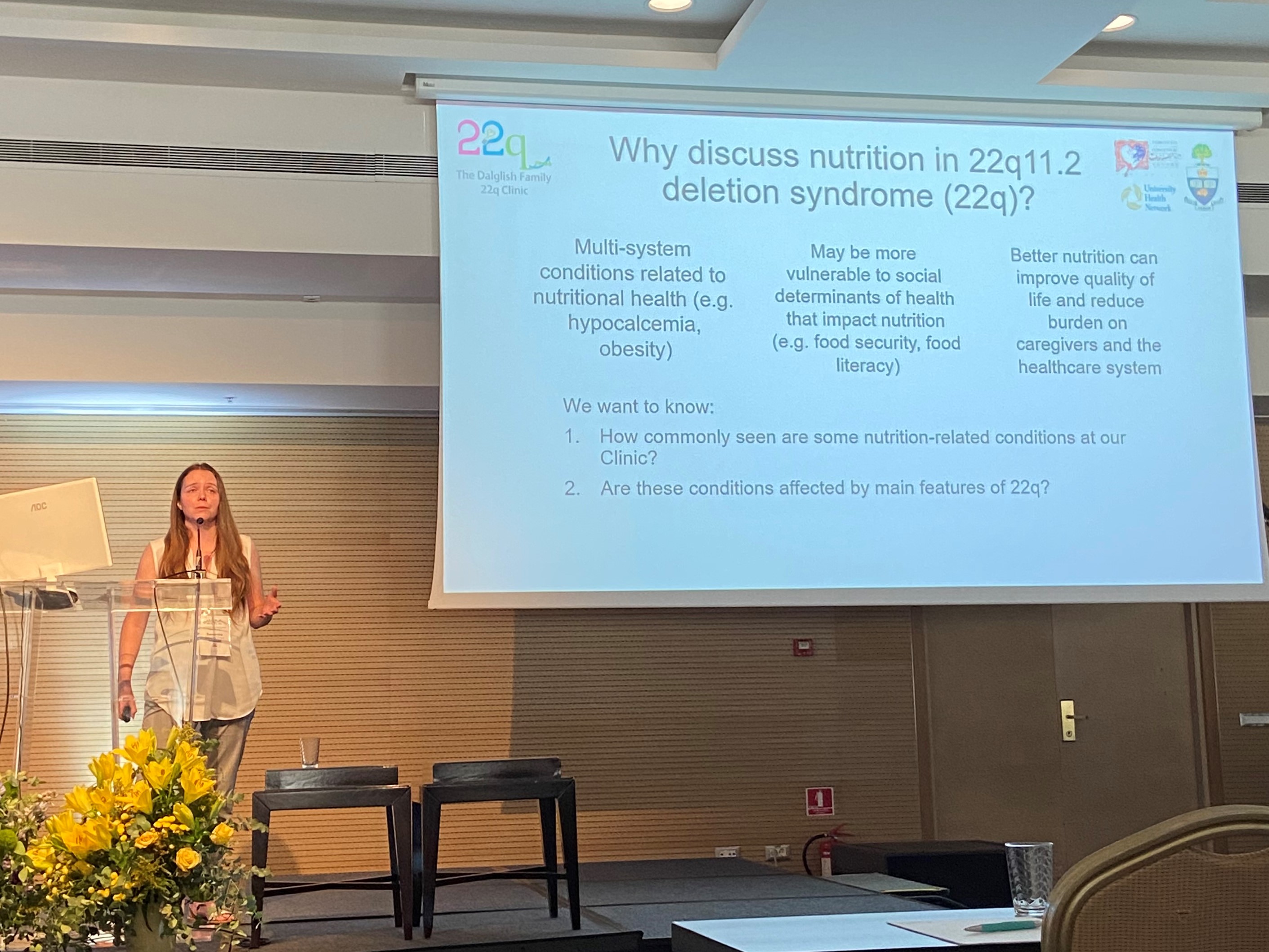 International Society for Adult Congenital Heart Disease October 13th, 2021 Incidence of infective endocarditis in adults with congenital heart disease and diagnosed 22q11.2 deletion syndrome Adonis Ng, Tracy Heung, Erwin Oechslin, Jessica Patzer, Anne Bassett [Abstract PDF] Infective endocarditis is a life-threatening infection of the bloodstream that settles inside the heart. Our team investigated whether or not the 22q11.2 deletion syndrome is an independent risk factor that increases the likelihood of infective endocarditis in adults with congenital heart disease and 22q compared to those without it. We compared the incidence amongst the consented patients at our clinic to the incidence in the general population. As expected, the incidence was much higher in patients at our clinic, suggesting that 22q should be treated as an independent risk factor for the development of infective endocarditis. Therefore, it’s an important step in advocating for extra attention being paid to these patients in the treatment and prophylaxis (or prevention) of endocarditis.

Dr. Anne Bassett was the 2020 winner of the Lieber Prize for Outstanding Achievement in Schizophrenia Research from the Brain and Behavior Research Foundation. She described her work in a presentation entitled Identifying a Genetic Subtype of Schizophrenia That is Clinically Relevant for Patients and Families.

At this annual congress about 22q for families and health professionals, Dr. Bassett presented a keynote presentation about optimizing outcomes for adults with 22q, met with families and participated in workshops.

22q11.2 deletion as a genetic model for multimorbidity in young adults Poster presentation by Tracy Heung

In this meeting for health professionals who work in human genetics, Dr. Anne Bassett presented on the burden of illness in patients with 22q, how this compares to the general public and how the patterns identified may in the future be used to identify genetic disorders within large populations.

Determination of disease-associated genes and gene-sets in Tetralogy of Fallot (Poster #P05) Poster presentation by one of our collaborators, Dr. Roozbeh Manshaei from the Ted Rogers Centre for Heart Research of the Hospital for Sick Children, Toronto.

Jelle Homans, one of our collaborators and an orthopedics doctor from the Netherlands, gave a presentation on “The correlation between schizophrenia and scoliosis 22q11.2 Deletion Syndrome: Implications for further research?”

The 90th Anniversary of the Biology Society of Chile - Joint Conference

Dr. Erik Boot, our former Dalglish fellow who is specialized in intellectual disabilities, presented “22q11.2 deletion syndrome and Parkinson disease.” to the attendees of this conference.

The 3rd Scientific 22q11 Seminar for Families and Professionals

The following list includes presentations by staff, students, and residents at both the Dalglish Family 22q Clinic and the Clinical Genetics Research Program (CGRP) at the Centre for Addiction and Mental Health (CAMH)

In this meeting for professionals working with patients with complex developmental and mental health issues, our Clinic fellow, Dr. Elemi Breetvelt, spoke about “22q11 Deletion Syndrome and the Criminal Justice System”. He provided insight on issues that may arise when law enforcement officers interact with adults with 22q.

On the first day, Dr. Bassett gave a lecture on brain and behaviour and adult complications as part of the programme on the clinical aspects of 22q11.2DS. On the second day, she talked about 22q11.2DS as a model for studying schizophrenia. She also played an important role in the discussions on how to set up a 22q11.2DS multidisciplinary clinic.

Dr. Bassett presented as the keynote speaker in this conference, delivering a talk about the clinical application of genetics for schizophrenia. She detailed clinical genetic testing and what the current standards of care are, and gave practical examples of how this relates to individuals with 22q.

At this international 22q meeting, Dr. Bassett presented on rare copy number variations in 22q with and without schizophrenia. Dr. Boot presented on movement abnormalities in 22q. Clinic social worker Lisa Palmer presented on the “diagnostic odyssey” of patients with 22q and her work on attempting to better understand psychosexual knowledge in people with 22q. Past, current and future students and trainees Dr. Elemi Breetvelt, Ania Fiksinski, Sarah Voll and Nancy Butcher also presented on 22q!

At this annual meeting, Dr. Bassett presented along with Dr. Erik Boot and other 22q researchers on 22q as a valuable model for understanding schizophrenia, parkinson’s disease and other neuropsychiatric disorders. The presenters demonstrated how early changes to the brain can be identified in individuals with 22q, which may be able to help us find pre-diagnostic signs of disease and new targets for treatment

Dr. Bassett presented at this annual meeting the results of a study which investigating the link between 22q11.2 deletions and risk for schizophrenia during pregnancy. Nancy Butcher also presented her results on use of clozapine in schizophrenia for individuals with 22q11.2DS.

Alongside our collaborator Donna McDonald-McGinn, Dr. Bassett presented the results of the practice guidelines for managing patients with 22q11.2DS and how this relates to the assessment and treatment of palatal abnormalities. Here is the abstract.

At the University of Hong Kong Grand Rounds, Dr. Bassett presented the latest research on 22q11.2DS and the genetics of congenital cardiac disease.

At this biennial international 22q11.2DS meeting, Dr. Bassett presented on antipsychotic treatment with clozapine in adults with 22q, and how to use a model of personalized care with patients.